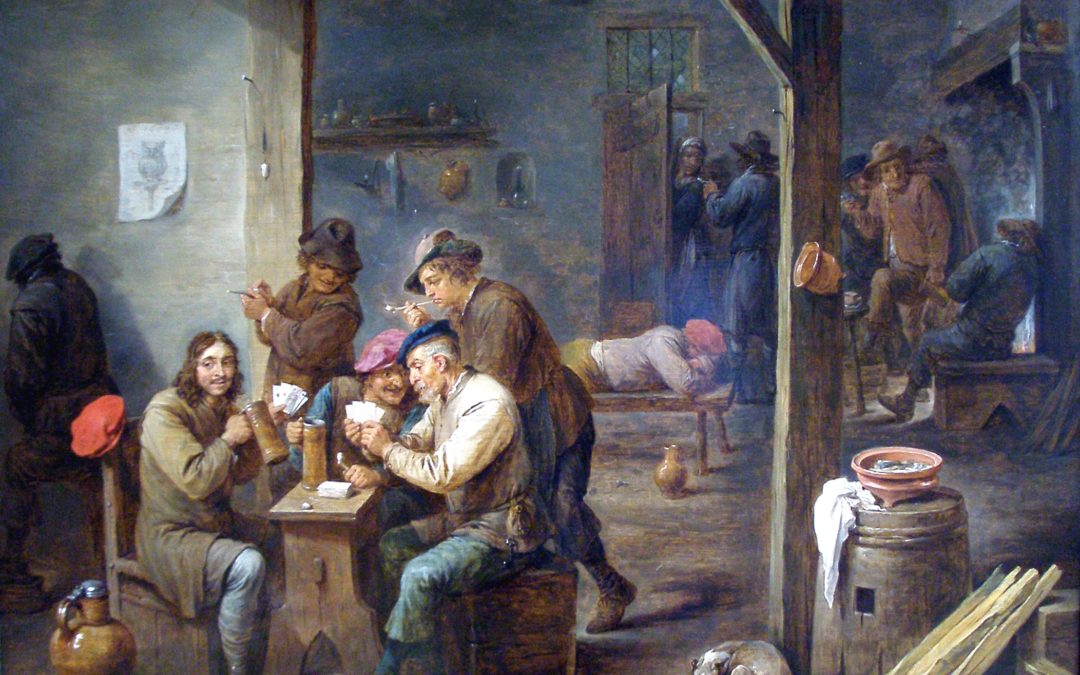 Have you ever wondered what the difference between an Inn, a Pub, an Alehouse, and a Tavern is? Well, you’re in luck.

Today I’m going to teach you how to use those terms correctly.

All of this is aimed squarely at use in fantasy or medieval RPGs, as in modern usage, they’re pretty interchangeable. Back in the day, though, they were different types of establishment.

First up, the tavern. A tavern is basically the old-timey equivalent of a modern pub: it’s a business whose purpose was to serve alcoholic beverages for consumption inside.

They first started appearing around the 12th century, and mostly catered to the middle classes. Wines were much more common beverages than beer in a tavern, and a good establishment might have a small selection of fortified wines and spirits.

As with modern-day pubs, many of them offered food as well, which could range from simple fares such as bread and cheese or a hearty stew, through to a full menu to choose from.

Entertainment might also be found in some taverns, with live music, satirical poetry, and gambling all being reasonably common in various places and time. In England, it was also not that unusual to conduct business in them, particularly in later periods (though when coffee houses arrived, they took over this function). On the whole, though, people were there to drink.

While now the word Inn is often part of the name of pubs, the inn has a different business model. Probably the closest modern equivalent would be a motel.

Inns existed for travellers to stay at. They provided beds, stables, food, and drink for weary folk who were either from out-of-town or passing through on their way to somewhere else. You’d only tend to find them on main roads, or in towns and cities.

An inn typically consisted of three things: stables, a common room, and lodgings.

The stables were there, fairly obviously, for the horses of the travellers. Both stabling and fodder were available, and those in towns would be happy to keep the horses for as long as you were in town.

The common room was often reasonably similar to a tavern. It served food and drink, not just to travellers, but often to the local community as well. It was also quite common in villages with a tavern for it to effectively be the main function room for the village.

As for the lodgings, they varied from inn to inn and depending on the period. For the sort of period that a typical fantasy RPG resembles (the late medieval, and the early renaissance) there would often be a choice of sleeping arrangements.

For those who had the money, and liked their own space, most inns would have at least one private room for hire. Typically the rooms would be quite small, but at least they had a bed and were all yours.

Those wanting a more budget-conscious option would have the possibility of communal sleeping. Many establishments had one or two dormitories, with as many beds in them as possible. Having said that, while bunk beds had been invented by the medieval period, they were not yet in widespread use. So figure a room with a few single beds.

Where the inn didn’t have the space for a dorm room, or it was full, there was another option: the common room. Simply sleep on the floor (or sometimes the table-tops would be removed and used to lift people slightly of the floor. It’s not a great option, but at least you’re not exposed to the elements, and you’re not going to get in trouble for sleeping on the street.

From the 17th century, with increased travel and more turnpikes/toll roads, inns became much more numerous. Probably in an RPG, you want one on any major trade road that can’t be travelled in a day, and enough in a town to cope with travelling merchants.

If the tavern was mostly for the middle-classes, Alehouses were for the working-classes. An alehouse was literally someone’s house, which was regularly opened up or people to come in and drink the host’s home-made ale. (If anyone is interested in an article on the difference between ale and beer, along with the main historical styles, let me know.)

Some alehouses were occasional things, others were open pretty much all the time. You could expect the ale to be in an open barrel, and for it to be reasonably cheap. Some of the more enterprising alewives might offer simple food, and a few also had bottles of other drinks for sale.

Patrons singing and gambling were frequent, but sometimes someone might bring an instrument and play.

Alehouses had been around in England since the Dark Ages. Still, it was really in the 14th century where they exploded in popularity. Also from the late 14th and early 15th centuries, you started seeing hops in Britain, so some of the alehouses converted to serving beer.

Unlike taverns, alehouses were usually not named and would be referred to by the name of the owner. The wives of bakers were somewhat over-represented as the proprietors of alehouses, which is thought to be because both businesses require grain and yeast. Also, bakeries work early in the morning and alehouses mostly in the evening.

A public house which later became abbreviated to a pub is a term that can really be applied to any of the above.

The name comes from alehouses, in that they are a house open to the public (for drinking). Having said that, other than they’re not necessarily aimed at the middle-classes, and potentially serve more ale, they tend to resemble taverns more than alehouses.

The term doesn’t appear before the mid/late 17th century, which is a little late for most fantasy RPGs. So, probably best to stick with the first three.

So there you go, now you’ll not get your inns, taverns, and alehouses mixed up. Also, hopefully by knowing the difference, you’ll be able to use all three to add variety and colour to your games.