A Brief History of Playing Cards 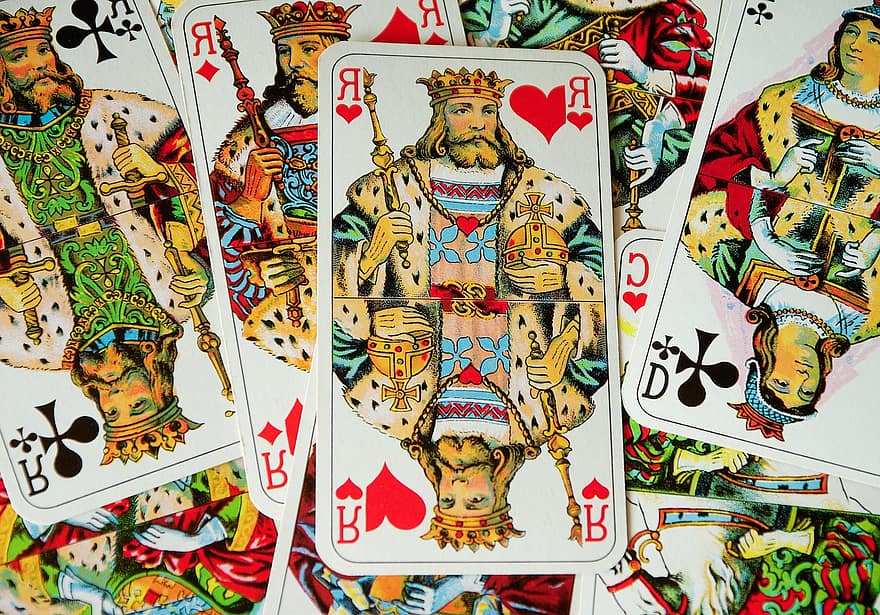 For this article, I’m going to talk about the ‘French Deck’, which is the standard deck of cards used all over the world, particularly in the UK and North America.

Many other decks, which I may cover in other articles, are prevalent in certain countries, but the French deck is the most widely used.

The first playing cards were born in 9th century China, thanks to advances in woodblock printing.

There seem to have been several different games (some involving dice, others drinking games). Unfortunately, none of them has surviving rules, just some vague descriptions. What does seem to be clear is that instructions on cards were common as well as just a number and suit.

So actually these potentialy had more in common with some modern card games than traditional ones.

By the 13th century, cards were used for tracking bets as well as for playing the game itself and had mostly become simply numbers and suits.

From China, playing cards spread into much of Asia and the Middle East.

In Arabic countries, pretty much all the decks were suited and numbered, with each suit having twelve cards (usually numbered cards from 1-10 plus a vizier and a king). There was still a great variety of suits, though.

By the 11th century, the Persian decks had spread to Egypt.

The classic tarot suits (cups, coins, clubs, and swords) were near-universal, although sometimes with variation (such as polo sticks, in place of staves). The Mamluk Egyptians also added a third ‘court’ card, the (excitingly named) ‘second-deputy’. The court cards didn’t have pictures of people on them though, due to certain strictures.

It is from Mamluk Egypt that cards spread to Europe.

The earliest mention is the city of Berne banning card games in 1367. They had hit Catalonia by 1371 too. By 1377, they were something of a fad all across the continent.

Pretty much all of these decks (and many of the modern decks) still retain the cups/coins/staves/swords suits.

By the mid 15th century pretty much all the Germanic countries had changed the suits (mostly to differentiate German manufactured cards from Italian manufactured ones). The Germans replaced cups with hearts (occasionally roses), coins became bells, staves became acorns, and swords became either leaves or shields.

It’s from these German suits that the French created the suits we know today. Hearts they left as-is. The bells they changed to carreaux or ’tiles’ (a bit different). Acorns became trèfles or ‘clovers’. Leaves became piques or ‘pikes’ (it’s the head of a pike). The shapes typically used to represent these are clearly recognisable as more-or-less the same as they are today.

All that’s changed is the names in English: hearts we just translated, diamonds we named after the shape, clubs I guess we went with what the Germans were doing, and spades we picked something else with a head that shape. So, while the suit names that we use are (apart from hearts) an English innovation, the suit symbols are a French one.

Splitting them into two red suits and two black suits was also a French idea. Before this, the symbols were coloured appropriately to what they were, often with multiple colours per symbol. By simplifying this to one easily recognisable shape in a solid colour, the manufacture of cards became a little cheaper.

The next reason it’s called a ‘French deck’ is that its combination of court cards is also French. The Mamluk deck (king/vizier/deputy) initially came to Europe translated as king, upper marshal and lower marshal. Towards the end of the 14th century, it had morphed into king, knight, and knave (mostly for visual distinctiveness). It’s worth noting that at this point in history, a ‘knave’ was a male child, so this is more like a prince than anything else.

Queens entered Italian and Germans decks in the mid-15th century as a new rank (for anyone keeping track, this would make a full Italian deck the same as the minor arcana from a tarot deck). The mid to late 15th century is also the period where the 78-card tarot deck originates, with the major arcana created to act as a permanent trump suit in trick-taking games. It wouldn’t be until the early 18th century that the tarot would become used as a fortune-telling tool.

The French decks of cards retained the kings, queens and knaves, but ditched knights to bring the court cards back down to three per suit, and those three being the one that we expect.

Many of the decks produced in France did something unusual, though; they gave each court card a name of a historical or mythical individual. For example, Lancelot as the knave of clovers and Charlemagne as the king of hearts.

Indices (the symbol and value in the corners) were introduced in 1693 but didn’t become widespread for another 100 years.

Reversible court cards (where the picture is the same upside-down) were invented in 1745 by a French card-maker, however, due to government regulation of card decks, he didn’t get to produce them commercially.

By 1800 they were available in most countries though. Taxation of card decks was standard in most countries (we had it in the UK until 1960), but France was unusual in that not only were the decks taxed, but the designs used were heavily regulated.

Jokers are the last addition to the modern deck, arriving around 1860 as a third trump card for euchre. The term ‘joker’ being a derivation of juker, a variant name for the game. Incidentally, the oldest record of a joker as a wild card comes from a poker variant in 1875.

So that’s how we get our modern ‘French Deck’.

Would you be interested in more articles about the history of gaming? If so, let me know in the comments below.