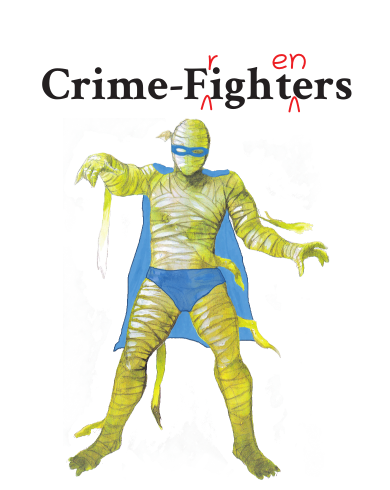 Are you tired of being a terrifying monster?

Would you like to give something back to the community, buy making it a safer place?

Why not adopt a superhero identity and fight crime using your monster powers?

Crime-Frighteners is a rules-light game in which the players are classic monsters, such as vampires, werewolves, and mummies, who have decided to become superheroes.

Although you could play it fairly straight, the game is intended to be played for laughs, as the characters struggle to protect normal citizens who are terrified of them.

Then, there’s always the matter of the secret identity…

What dice do I need to play Crime-Frighteners?

You just need a piece of paper for a character sheet, a pen or pencil for any notes you want to take, and a few d6 (ordinary six-sided dice).

Plus, these rules of course.