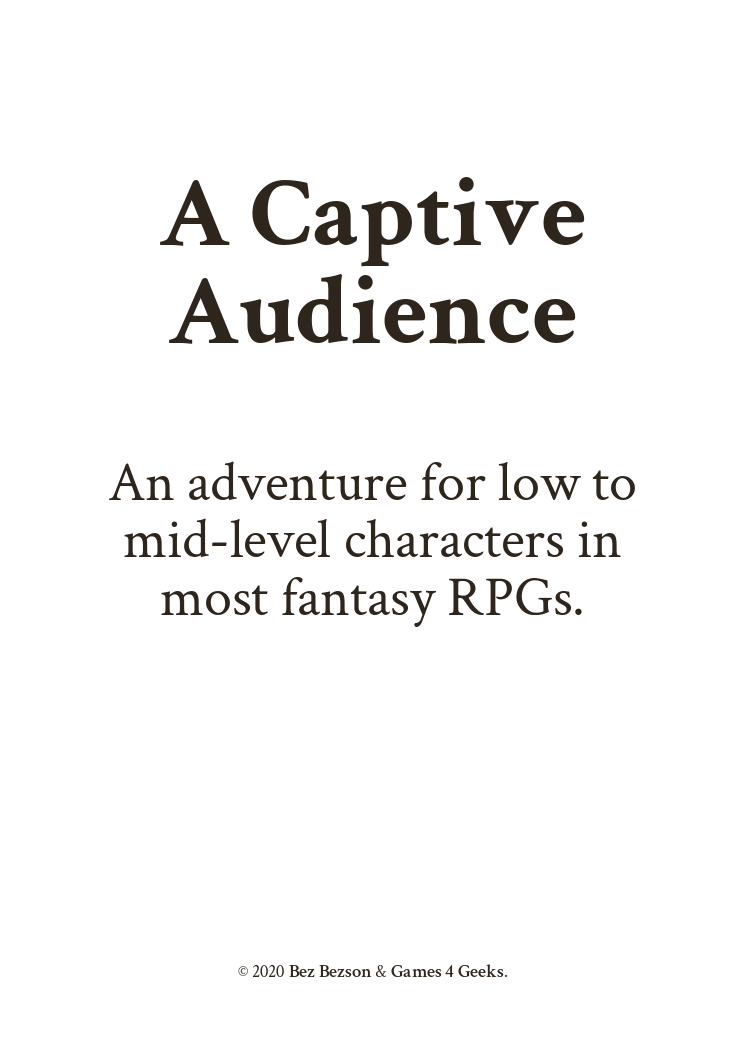 An adventure scenario suitable for most fantasy settings.

Some villagers have been captured by raiders, and the PCs have been hired to rescue them. How can they make their way into a camp full of hostile enemies? Why, by being smuggled in by a travelling circus.

This set-up puts the PCs in a situation where they can role-play both their interactions with the circus, and with the tribe they’re infiltrating, and allow any characters with performance skills to shine in the ring.

Meanwhile, there’s the tactical challenge of finding the hostages, freeing them, and stopping the tribe from simply taking revenge on the village.

How will the PCs solve things? Will they solve things, or does it become more of a ‘damage limitation’ problem?

Cats with Sticks is availvable from:

What games is this scenario suitable for?

A Captive Audience was written to be able to suit a typical Dungeons & Dragons world, as something that gamesmasters can easily fit in somewhere where there’s plains.

It has some thoughts on what statblocks should be used in 5e D&D.

However, there’s little in the way of setting information, so it wouldn’t take much work to adapt to most fantasy settings.

What 'level' of characters is it suitable for?

Since it was written to be able to be slotted into most fantasy worlds, the adventure wasn’t written with specific level in mind.

Certainly, the party should be of a level where picking a fight with a hundred bandits isn’t an option, but other than that there’s a lot of wiggle room. There are no fights built into the scenario, so while the PCs might decide to take out guards, or fight their way out of a situation, they might also resolve things with investigation and diplomacy.

So, while high-level characters will have more options in what they can do, this adventure is more about roleplaying and creative problem solving than combat.